Bled island—rising beautifully in the middle of glacial Lake Bled

My selection of countries on this European vacation (Croatia, Slovenia and Bosnia and Herzegovina) was based on visiting places where there wasn’t a lot of emphasis on museums. Since Rohan was only three years old, our priority was flexibility. Thus, we rented a car for the entire duration, stopped whenever we wanted to take a break, and visited cities and small towns without having to hurry because of crowds.

Bled is an Alpine town situated alongside Lake Bled. Its main attractions are a cliff-top castle (Bled Castle) and an island (Bled Island) with a church built on it. Bled Island (in the middle of glacial Lake Bled) has to be the prettiest island in the world with the prettiest church (Assumption of Mary Pilgrimage Church) ever. We took a pletna (flat-bottomed wooden boat) to this island, and the picturesque location of the island amidst the turquoise waters and surrounded by the imposing Julian Alps. After climbing the 99 steps from the dock to the church, Rohan loved ringing the bell (installed in 1534) in the church which is supposed to make your wishes come true.

We enjoyed the hike to Bled Castle that is built on a precipice. With a cool breeze blowing, it was nice to stroll in the courtyards and get a different view of Lake Bled and Bled Island. After the long walk, we treated ourselves to a popular local dessert called kremšnita—vanilla-custard-and-cream cake with rum and raisins, topped with whipped cream and chocolate syrup. Heavenly! 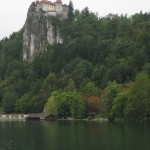 Bled Castle perched on a precipice 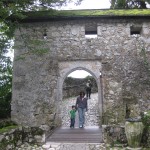 Entrance to the Bled Castle 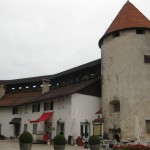 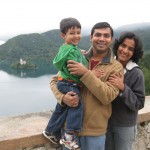 View from Bled Castle with the pretty Bled Island behind us 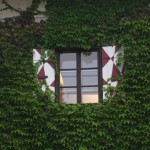 Ivy-covered walls of the castle 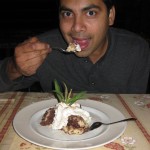 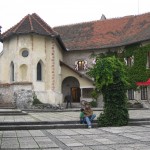 Catching our breath after a steep hike to the Bled Castle 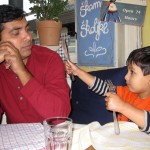 Lunch after touring the Bled castle… …he’s pretending to be a knight, and I (clearly) am not amused! 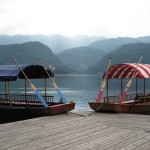 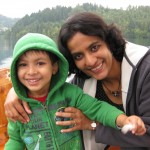 In a pletna boat (flat-bottomed wooden boat), on our way to Bled Island 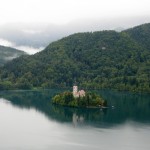 Bled Island in Lake Bled as seen from Bled Castle… …that’s three “Bled”s in one sentence! 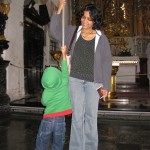 As per the locals, if you can get the bell to ring three times with one pull of the rope, your dreams will come true 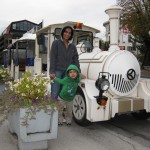 The tourist train that takes you around Lake Bled 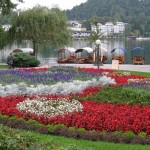 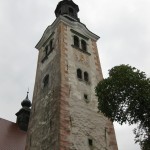