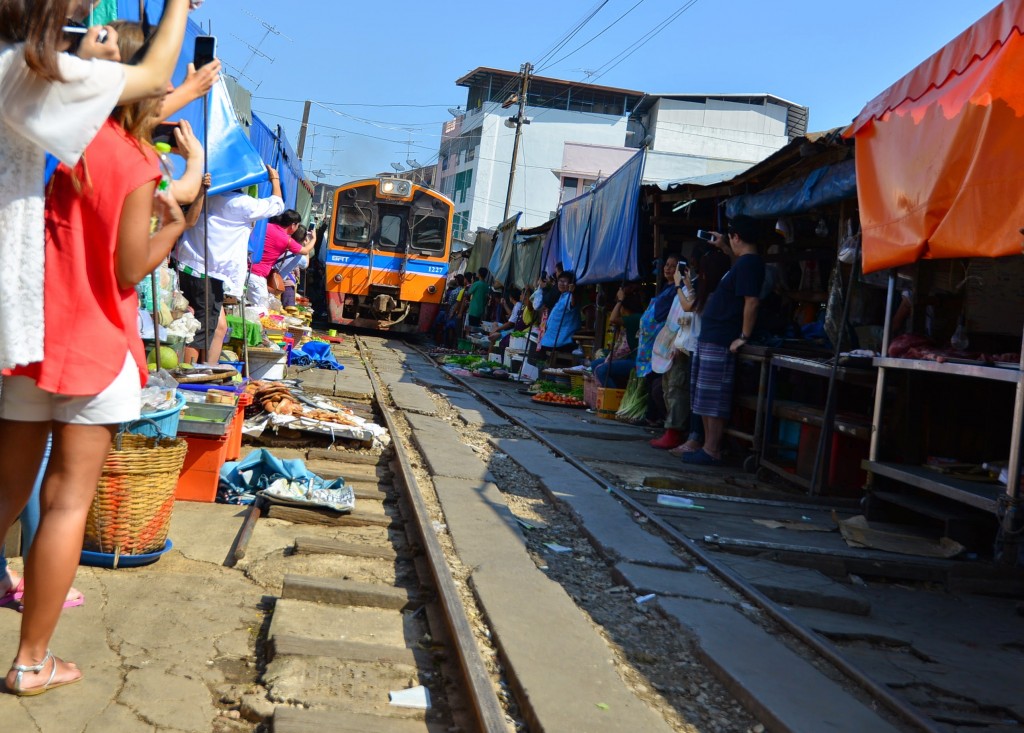 Train crawling through Maeklong Railway Market… …the awnings and baskets are pulled back from the track just about enough distance so there is no contact with the train. And once the train passes, everything’s back!

We came here to see the legendary Maeklong Railway Market—a market through which a train (quite literally) plows through several times a day. The Thai refer to this market as Talad Rom Hoop which means the “Umbrella Pulldown Market”, and that’s exactly what it is. As you enter the market, the first thing you will notice is the crowd. Yes, it’s crowded, it’s packed and you better get used to locals touching and pushing you unintentionally as they make their way past the tourists so they can get done with their shopping and head home! The second thing you notice is that you are walking on railway tracks that are competing for space with the vendors’ baskets, trays and stalls. And therein lies the magic of the Maeklong Railway Market!

Thrice a day, the market undergoes a transformation as a train crawls through the market, kissing and caressing the vendors’ baskets and awnings and barely missing knocking down the gawking tourists! Space is certainly tight so when the market is busy during the day, vendors have the awnings stretched across the railway track. However, as soon as an announcement is made that the train is approaching the market, the vendors get into motion like clockwork; they pull the awnings back and push their baskets and trays just about a few inches away from the tracks to prevent the train from knocking them. Then the vendors wait for the train to go through, but while they are doing that, they are constantly shouting out to daredevil tourists to get off the middle of the track or stay sufficiently away from the track so the train won’t drag them along. And once the train passes through, the awnings are back in place, the baskets and trays are back near the tracks, and the market is back in action… …you just wouldn’t know that a train had passed through minutes ago!

We were able to time our visit to actually see this phenomenon (for a lack of a better word). It was amazing to see the vendors’ precision and choreography, but it was downright exhilarating and scary to have the train pass about a foot away from your body! 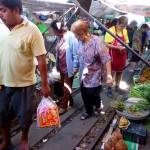 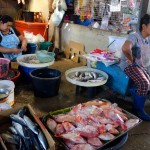 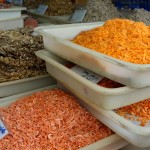 Dried fish… …surprisingly, it did not smell, or should I say “stink” 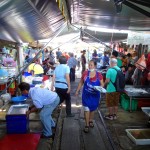 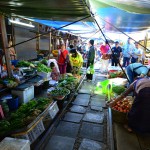 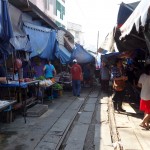 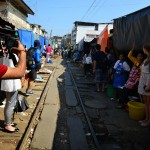 So everything has been neatly packed and folded, and I’m ready for the train 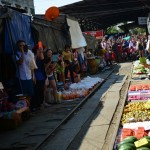 Tourists positioning themselves for the best picture/video… …though I’m not sure standing right in the train’s path (on the track) is the smartest idea!! 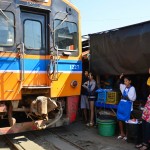 Train comes daringly close to where I’m standing… …just check out the distance between the people, awnings and other stuff close to the track 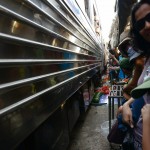 Prachi and Rohan… …they are never getting this close to a moving train ever again!