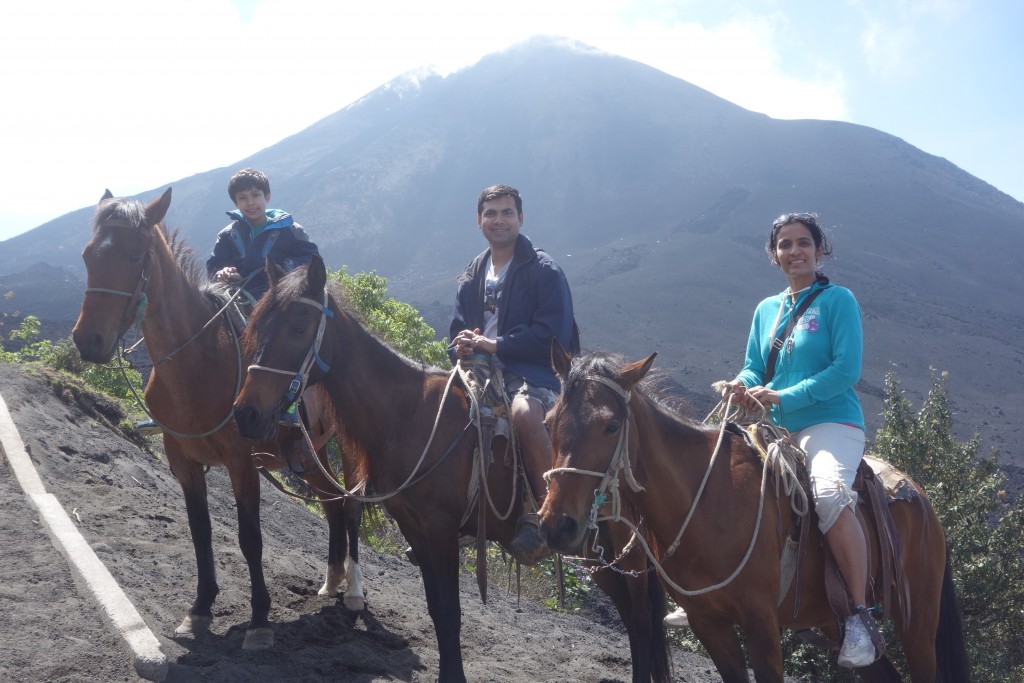 All saddled up and rarin’ to go… …on the way up to the Pacaya volcano!

Quick! What are the two things that come to your mind when I tell you that Pacaya is an active volcano that erupted as recently as 2014 (a year prior to my visit)? Nope, not that. Naah, not that either. No, that’s incorrect too! Okay, okay, here’s the answer: horses and marshmallows!! Yes, you read that right—horses and marshmallows! And I wouldn’t have guessed correctly either if I hadn’t made this trip to Guatemala. Read on for more details… …

Pacaya volcano (2,552 m / 8,373 ft) is 40 miles southeast of Anitigua Guatemala. We were picked up promptly from our hotel by our guide on a perfectly clear sunny morning. As we pulled in at the base, several middle to high school-age kids just swarmed our van, each one convincing us to hire their horses for the ride to the top. We chose a horseback ride rather than hike all the way up since we had a flight to Tikal scheduled for later in the day. In hindsight, this was a better decision given how hot and dusty it got. The ride up was exciting as it offered fantastic views of the entire area. Watching the dried and hardened lava fields from eruptions of previous years was a sight to behold! Pacaya is an extremely active volcano and you can actually see the varying shades of grey among the lava fields that help you distinguish one flow from another.

You cannot hike or ride to the top as the main crater is still smoking, and there is always the persistent risk of another eruption. We got off our hourses to slide up and down the lava slopes. The ground was hot and you had to be careful not to have your shoes melt. And in several places, you could just dig and see smoke come out of the holes because of the lava flowing deep under the surface. The caldera stood right in front of us and it did not disappoint—it was huge, cracked and was emitting large clouds of smoke. This bad boy was smoking, and mighty proud of that!

As we got to our destination on the mountain, we were completely surrounded by lava rock. The rocky terrain seemed alien in nature and the smell of sulphur would have fooled anyone into thinking you were on a different planet. But as we dismounted our horses, our guide had another treat in store for us that’s quite unique to Pacaya—marshmallows! Armed with several thin branches, our guide pulled out a bag of marshmallows. Yes, we were going to roast marshmallows à la Pacaya style. The jagged lava rock had several openings that emitted smoke and it was just a matter of sticking your marshmallow skewer in them, and voilà , within minutes, you had nice toasted golden-brown gooey marshmallows. We had a blast having our sweet treat after a hot, sweaty and dusty trip up. All in all, the view was fantastic, the treat was delectable and the experience was memorable! 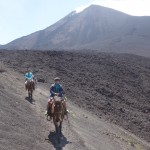 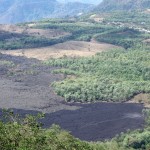 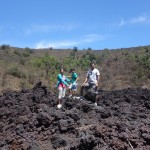 Atop lava rocks… …the terrain was sharp and jagged, and the sulphur stench didn’t really help matters! 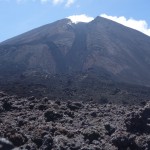 Caldera… …you can see some smoke still coming out and the black remnants of solidified lava as it came down the mountain in March 2014! 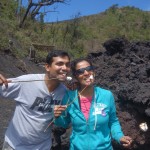 Getting a mouthful of roasted, toasted, gooey marshmallows… …thanks to molten lava brewing underneath the surface! 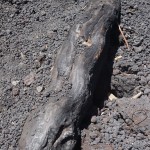 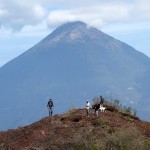 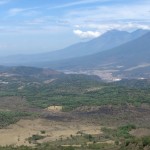 Volcán de Agua in the distance with Volcán de Fuego and Volcán Acatenango behind it… …on the left are the lava flows from previous eruptions and on the right are the villages of San Vicente Pacaya and Amatitlán. 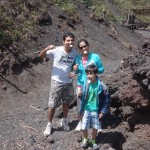 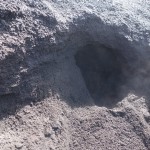 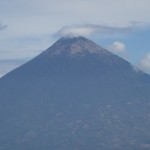 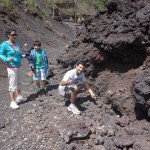 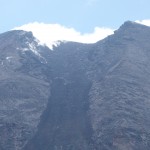 Close-up of the caldera… …those are clouds in the background, but in the foreground, that is smoke from the lava 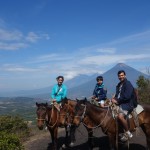 Perfect day and perfect weather for a horseback ride up the mountain! 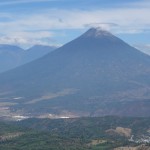