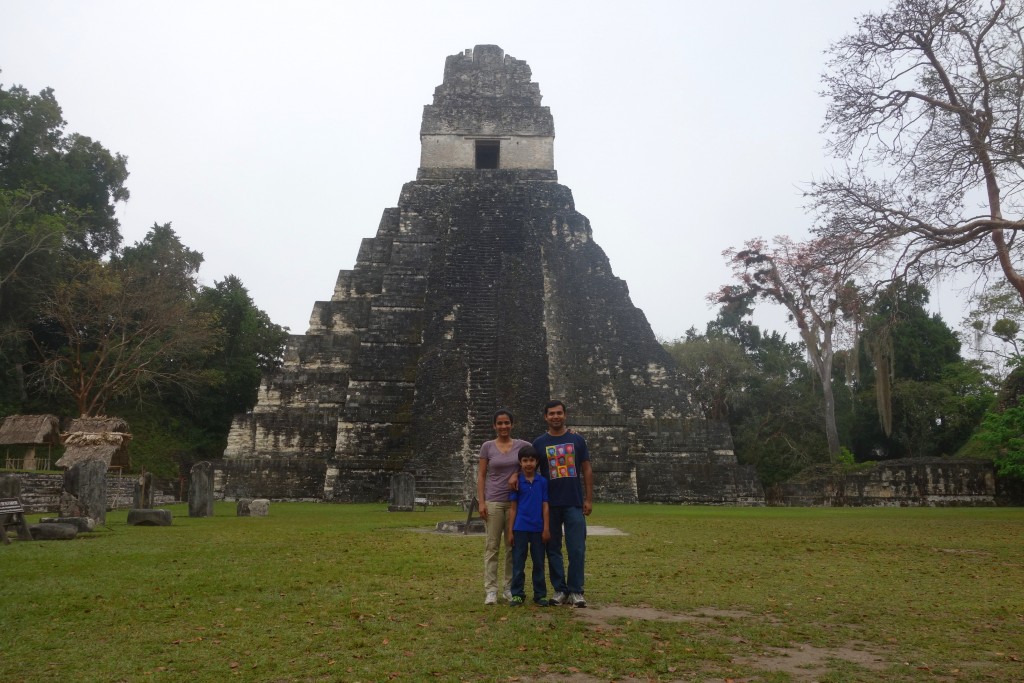 Standing in the Great Plaza, with the 47 m Tikal Temple I, a funerary pyramid (built in 732 AD) towering over us… …loved the roof comb structure that crowns the summit, typical of monumental Mesoamerican architecture

Very rarely do we find ourselves in a situation where we have to wake up in the wee hours of the morning, and under the not-so-convenient brightness of a flashlight, brush our teeth, change into outdoors clothes, wear shoes and head out to climb a Mayan pyramid! But we did that in Tikal!

Tikal is the ruins of an ancient Maya city that flourished from 400 BC up until 900 AD, reaching a population of up to 90,000 inhabitants. Since we stayed right inside Tikal National Park (a UNESCO World Heritage Site famous for being one of the largest archaeological sites of the pre-Columbian Mayan civilization), the hotel had limited resources and provided electricity and hot water for just about six to seven hours per day. So we found ourselves waking up at 3:30 am to join a sunrise tour, but that involved getting ready in the dark and clumsily finding our way out of the room. The plan was to leave the hotel at 4:00 am and hike through the rainforest and climb the 65 m (212 ft) tall Mayan pyramid (Temple IV) by 5:00 am to see the sunrise over the lush green canopy. Just walking through the rainforest was an adventure by itself, but climbing a Mayan pyramid built in 741 AD just gave me the chills.

As we positioned ourselves at the top, Rohan was fighting a massive sleep attack, and he had to make sure, he wouldn’t roll off his seat… …otherwise it was a straight drop down! For the first half hour, there was just darkness all around and the whispers of the people around us. And then suddenly a howl was heard in the distance. And then pin drop silence. But the sound of silence lasted for less than a minute as the jungle immediately came alive with more howls and shrieks. Yes, the howler monkeys had decided to awaken the dawn, and that set the entire jungle into a tizzy. Giving the howler monkeys a run for their money, was a cacophonous flock of parrots and oropendulas. As the first sliver of light cut through the darkness, we were, for the first time, able to grasp the height at which we were… …so high above the canopy looking down on the mist that delicately touched the treetops. The ambiance was mesmerizing and the sight was breathtaking! The wildlife of Tikal was active and their sounds reached a crescendo as the howler monkeys and spider monkeys, and birds such as toucans, parrots and woodpeckers hit higher and louder notes. Despite my best effort with words here, it is really difficult to capture the thrill of sitting atop the tallest Mayan pyramid and experiencing the sights and sounds of jungle in their fullest glory with its natural inhabitants. We never saw the sun break through the heavy mist but that’s an adventure we will leave for another day.

We spent the rest of the morning walking through Tikal National Park. Historical records put the growth of Tikal starting as far back as 2000 BC. What makes Tikal different from any of the earlier Maya ruins such as Chichen Itza, Uxmal or Tulum that I have visited, is that Tikal is raw and unexplored. Only about 15% has been excavated so when you see triangular mounds with a dense growth of plants and grass, just knowing that there is a very very ancient temple or pyramid under it is an eerie but an exhilarating feeling. Tikal should be on your list if you love Maya ruins without the crowds because there’s so much that you can explore on your own that you can pretty much find your own personal temple, pyramid, platform or a monument to absorb the Mayan magnificence. 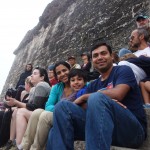 Looking down at the mist-covered canopies from the top of the tallest Mayan pyramid… …the crisp air, the mesmerizing ambiance, the raucous cries of howler monkeys and the screeching of the birds all made for a truly unique experience! 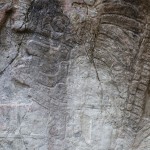 Stela 16, erected in 711 AD, showing King Jasaw Chan K’awiil I in an elaborate headdress… …he reigned from 682 – 734 AD. You can see the side profile of his face in the bottom one-thirds of the photos. 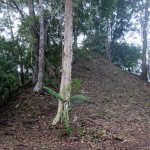 One of the appeals of this ancient Mayan city is that only 15% of the ruins have been excavated… …here you see a stepped pyramid still covered with debris, soil and plant life. 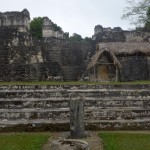 The North Acropolis at the Grand Plaza that served as a royal necropolis and was a center for funerary activity for over 1300 years. 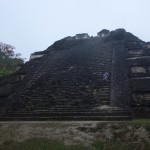 Talud-Tablero Temple (built between 550 – 770 AD) of the Mundo Perdido (Lost World) complex stands 22 m high… …and if you don’t have any fear of heights, you can climb to the top 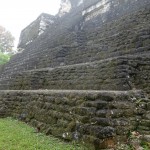 A stepped pyramid—limestone was the primary rock used for construction 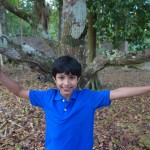 Lending the tree some additional arms… … 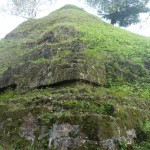 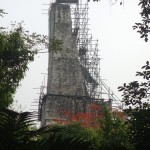 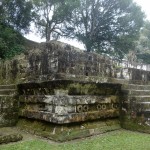 Structure 5D-43, a temple in the East Plaza 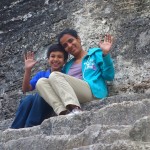 Surprisingly smiling faces at the top of Tikal Temple IV… …given that we woke up at 3:30 am for the Tikal Sunrise tour 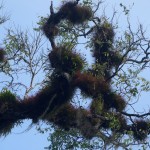 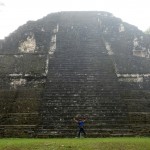 The Lost World Pyramid or the Great Pyramid (31 m high and 67.5 m wide at the base), the centerpiece of the Mundo Perdido (Lost World) complex was rebuilt at least five times… …the current version is dated around 250 AD 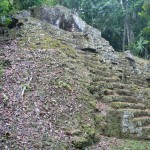 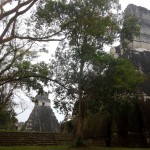 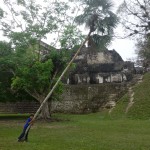 We didn’t see too many howler monkeys in the forests, but this was the cutest one we found… … 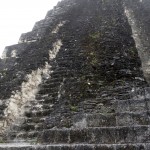 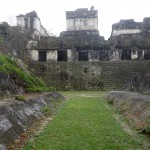 One of the five fascinating ballcourts 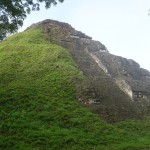